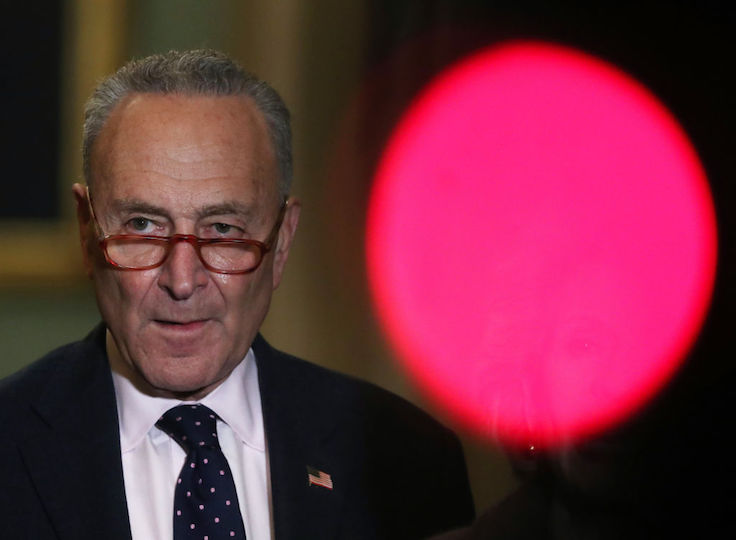 Schumer, who has said that dark money is “casting a shadow over our political process,” has condemned groups on the right that do not disclose their funders. He also demanded one right-leaning organization release a list of its donors, saying the public “deserves to know who is funding” campaigns against Democrats.

Despite the condemnation of dark money groups, the Schumer-linked Senate Majority PAC, which works to elect Democrats in the Senate, is closely affiliated with Majority Forward, a 501(c)(4) nonprofit that does not disclose its funders.

From June 18, 2015, to late 2018, Majority Forward paid the Senate Majority PAC for the “sharing of facilities, equipment, mailing lists, or other assets” and employees. The group pushed $487,870 to the PAC for office space while disbursing another $1.2 million for employees, three years‘ worth of tax forms and FEC records show.

Majority Forward was the biggest dark money spender of the 2018 election cycle and is currently launching attacks against Republican Senate candidates up for election in 2020.

Throughout the 2018 election cycle, Majority Forward poured $46 million into independent expenditures for Democrats, which accounted for nearly a third of the $150 million total spent by all groups who do not disclose their donors.

Majority Forward has laid out plans to attack Sens. Cory Gardner (R., Colo.), Susan Collins (R., Maine), David Perdue (R., Ga.), Martha McSally (R., Ariz.), and Joni Ernst (R., Iowa) for the 2020 election cycle. It began pouring hundreds of thousands into ads against the vulnerable Republicans in early 2019, according to the Center for Responsive Politics. The group on Tuesday launched a six-figure television and digital ad campaign against Collins.

The Senate Majority PAC did not respond to a request for comment on the money it has received from Majority Forward since 2015 for its shared staff and office space.

Schumer and other Democrats have chastised Republican dark money groups such as the Judicial Crisis Network, a right-leaning organization. Schumer and Democratic senators earlier this year demanded JCN make public the names of individuals who have given the group more than $10,000 since 2017. The senators released a letter in response to a $1.1 million ad campaign from JCN that called on the 2020 Democratic presidential candidates to release their lists of judges.

“The American public deserves to know who is funding these attacks, and whether the same individuals are financing litigation before the Court that will ultimately be decided by the Justices and judges they helped to confirm,” the letter said.