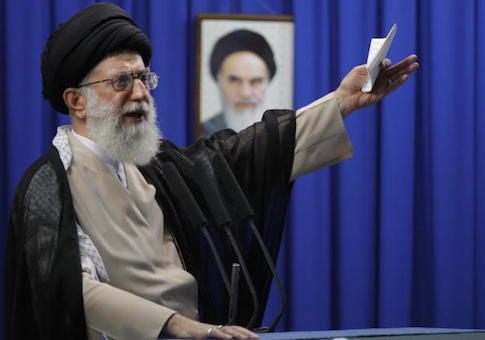 Top Iranian military figures on Thursday said the Islamic Republic’s recent missile strikes on U.S. outposts and assets are “the start of big operations which will continue in the entire region.”

“The missile strikes on one of the United States’s most important bases within the framework of martyr [Qassem] Soleimani operation was the start of big operations which will continue in the entire region,” said General Amir Ali Hajizadeh, commander of the Islamic Revolutionary Guards Corps’s (IRGC) Aerospace Force.

Iran’s missile strike Wednesday on two American bases in Iraq is just the start of Tehran’s new offensive posture, according to Hajizadeh.

The military leader’s remarks are a sign that Tehran has no interest in de-escalation following President Donald Trump’s decision Wednesday to delay the launch of another U.S. attack on Iranian interests.

Iran says its goal is to remove every single American troop from the region through targeted strikes across the Middle East.

“We were not after killing anyone although tens of U.S. troops have likely been killed and wounded and were transferred to Israel and Jordan on nine sorties of C-130 flights,” Hajizadeh was quoted as saying in the country’s state-controlled press.

The United States maintains that it has not suffered any casualties as a result of Iran’s strike.

Iranian leaders claim to have drawn up “high casualty operations” that could lead to the deaths of at least 500 U.S. military personnel “in the first step.” Within 48 hours, the Iranian military claims, it could kill 4,000 to 5,000 Americans.

Iran fired at least 13 missiles at U.S. bases in Iraq this week and is readying to launch “hundreds of missiles in the first hours” of a second protracted attack, according to Iranian military officials.

Iran is urging the United States to stand down on any further attacks.

“[The United States] will face a more painful and crushing response,” the IRGC said in a statement this week, also reported by Iran’s state-run press organs.

“All the U.S. allied states where the terrorist army has a base, any territory that becomes the origin of any hostile and aggressive action against the Islamic Republic of Iran in any way will be targeted,” the IRGC said.

Iran also has threatened the “total annihilation” of Israel in response to the killing of Soleimani, a top Iranian commander who helmed Tehran’s regional terror operations for decades.

“We believe that the Zionist regime by no means stands aside from the criminal U.S. regime in these crimes,” the IRGC said in its latest remarks.