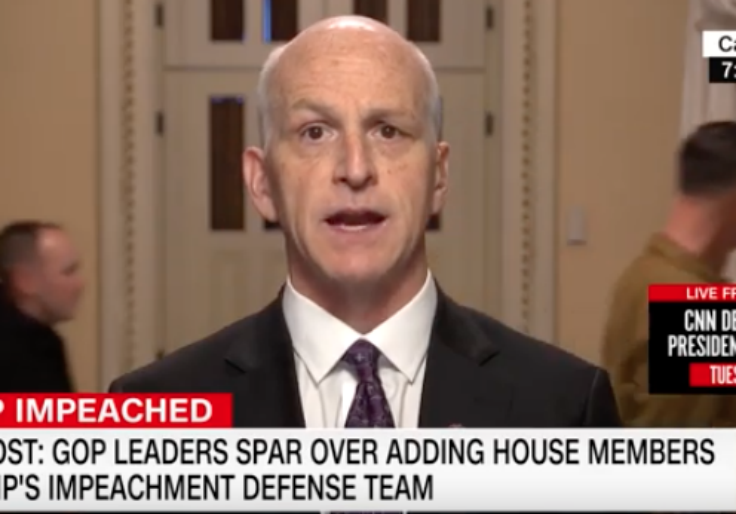 Rep. Adam Smith (D., Wash.) on Thursday split from House Speaker Nancy Pelosi (D., Calif.) on whether to send articles of impeachment to the Senate, but reversed his position later that morning.

The morning began with Smith, the chairman of the House Armed Services Committee, saying the time had come for Pelosi to put the impeachment articles in the hands of Senate Majority Leader Mitch McConnell (R., Ky.). Within three hours, he tweeted an approval of Pelosi’s strategy.

“I think it is [time],” Smith said on CNN’s New Day at 7:35 a.m. “I understand what the speaker is trying to do, basically trying to use the leverage of that to work with Democratic and Republican senators to try to get a reasonable trial, a trial that would actually show evidence, bring out witnesses. But at the end of the day just like we control it in the House, Mitch McConnell controls it in the Senate.”

At 10:10 a.m., however, Smith said he “misspoke” when he discussed Pelosi’s strategy. In a series of tweets, he recanted his words on CNN and said he “wholeheartedly” supports Pelosi’s decision.

“I misspoke this morning, I do believe we should do everything we can to force the Senate to have a fair trial,” he said. “If the Speaker believes that holding on to the articles for a longer time will help force a fair trial in the Senate, then I wholeheartedly support that decision.”

He added that he’s “with the Speaker that we should do everything we can to ensure” McConnell holds “a fair trial.”

I am concerned that Senator McConnell won’t have a fair trial and I am with the Speaker that we should do everything we can to ensure he does. Ultimately, I do want the articles sent to the Senate for the very simple reason that I want the impeachment process to go forward.

The House voted to impeach Trump on Dec. 18, but Pelosi has repeatedly maintained she’s not prepared to send over articles of impeachment until she sees a Senate resolution laying out the process for Trump’s trial.

According to a Time profile on Pelosi, she got the idea for this tactic from a segment on CNN with John Dean, White House counsel under President Richard Nixon, last month.

“The rule empowers the speaker to be able to decide how to send the articles and when to send the articles over to the Senate,” Pelosi said, according to an aide. “My view is we don’t know enough about what they are going to do. We want to see … their level of fairness and openness and the rest.”

Minutes after Smith’s tweets, former congressman David Jolly said on MSNBC that it must have been Pelosi who forced the move. “Pelosi got to her members,” Jolly said.