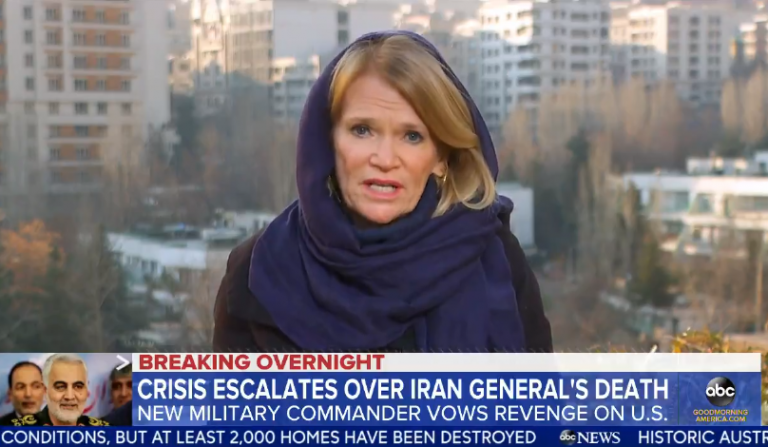 The U.S. media’s peculiar (albeit predictable) response to President Donald Trump’s successful assassination of Iranian general Qassem Soleimani continued on Monday during their coverage of the terrorist’s funeral in Tehran.

NPR had reporters on the ground covering the “historic day” and attempting to dispel claims that the grief on display in the streets of the Iranian capital was in any way “coerced” by the authoritarian regime.

Moments before the “Death to America” chants began. pic.twitter.com/hHzkfZ042f

Michael Barbaro of the New York Times highlighted the “amazing images and audio” from the NPR team. Several hours earlier, Barbaro posted a bizarre podcast interview with Times reporter Helene Cooper in which Cooper lamented that the U.S. military was “tragically … very good” at killing people.

Listening now and this line just floored me: “This is something that the American Defense Department, quite tragically almost, is very good at doing: we know how to kill people.” Sorry, what? The tragedy would be if our military were very bad at killing people! https://t.co/jlc0FNit7d

ABC News’s Martha Raddatz donned a (mandatory) headscarf and walked among the “massive and emotional” crowds of mourners. She declared that the Iranian people were “united against America.”

“A powerful combination of grief and anger, with shouts of ‘death to America’ echoing through the streets around us.” https://t.co/Ho2Tizj1C6@MarthaRaddatz reports live from Iran. pic.twitter.com/kFrcKycwSg

The Associated Press published a touching piece on Ayatollah Ali Khamenei’s “rare display of emotion” at the funeral of the terrorist general “with whom he shared a deep bond.” The AP noted that the Iranian despot’s “voice cracked under the weight of the moment” as he “cried openly” while mourning the death of his friend.

Some journalists did not let the somber occasion stop them from sharing “sick burns” aimed at President Trump. Washington Post national security reporter Missy Ryan, for example, took a break from reporting to retweet a photo comparison of the crowd of mourners in Tehran and the crowd in attendance at Trump’s inauguration.

A wapo natsec columnist RTing this is why media employers will soon be forced to stop all of you from tweeting anything that’s not a link to your own edited and curated work. pic.twitter.com/Z2CE7XuXJx

Meanwhile, one of Ryan’s colleagues at the Post published a deeply reported story on the Soleimani strike that appeared to contradict initial reporting that suggested the decision to target the Iranian general—who was personally responsible for the deaths of American soldiers in Iraq—was made impulsively by a president eager to start a third world war.

Story yesterday: Soleimani strike was an oddball option that DOD wasn’t serious about, but crazy man Trump picked it, shocking everyone.

Story today: Soleimani strike was months in the making, all to get Trump to finally say “yes.”

Additionally, the New York Post provided some useful reporting on the Soleimani funeral by publishing photos of what was alleged to be the dead general’s casket lying across a row of seats on a passenger jet.